This turned out very nicely, so I'm recording how I made it before I forget!

My latest kitchen gadget is a simple mandolin and I LOVE it!  The razor-sharp blade makes thin even slices of almost anything firm enough to be sliced at all. Here, I used it to make almost paper-thin slices of red bell pepper, green pepper, and ginger, which made lovely translucent colors floating in the white broth.

Fish broth is made very quickly and should never be simmered at length like chicken or beef broth.  The broth can become bitter if simmered too long.  This recipe is easier than it looks.

The bell peppers in this recipe are what I had on hand tonight, but they could be replaced by others like broccoli, green beans, carrots, which you would cook al dente in some of the broth rather than add raw like the peppers.  Avocado slices would be a nice addition just before serving, too.

2.  Rinse the fish heads. Put the heads in the large pot with the water, bring to just under boiling and simmer for 20 minutes.  Do not boil!

3. Strain the broth into a large container and return to the large pot.  Let the strainer contents cool down in a bowl.

4. Meanwhile, slice the peppers thinly (a mandolin does this superbly), peel and slice the ginger very thinly (mandolin!), and slice the spring onions as finely as you like, green and white parts (but not the wilted or tough parts of the green).

5.  Prepare 2 extra containers for picking the heads apart.  In one container, put the flesh, which is mostly in the neck (collar?), but there's also a lovely piece in the cheek and other bits here and there in the head.  In the other container, put all the soft gelatinous or fatty tissues you can pick off the "bones" (it is cartilage).  You can put the eyes in this bowl (they're are said to have a wonderful flavor - I'm to chicken to taste them...!).  Discard the hard parts.  The skin has a lot of fat under it, so put it in the fatty tissues container (that fat is home to all those great omega-3 fatty acids).

7. Put the soft tissues in the blender with 2 cups of broth and the garlic.  Liquefy.

8.  Pour the contents of the blender into large pot holding the rest of the broth and also add the coconut milk, salt, sliced peppers, green onions and ginger root, the salmon flesh and the shrimp with its cooking broth.  Strain the lemongrass-flavored broth into the soup.  Add hot cayenne pepper to taste and correct the salt to taste.  Reheat the soup gently.

9.  Meanwhile, wash the cilantro and discard any wilted leaves.  Lay in a bunch with all the stems in your supporting hand.  Chop the leaves into approx one inch pieces.  Add to the soup just before serving.

10. Juice the lemon/limes and add to the soup just before serving.


I wish there was a way I could figure out how much n-3 fatty acids was in a cup of this broth!  All I know is I read somewhere that some of the commercial fish oils are extracted from fish eyes, so I know the fatty acids are in there.

Posted by Odddlycrunchy at 9:16 PM 2 comments:

Wash cilantro and discard wilted parts.  The roots are ok to leave in, just wash well.
Put all the ingredients in a blender and process, starting on the lowest setting and increasing to the highest setting until grainy but well mixed.  You'll have to push down occasionally.

Store in jars in the refrigerator. Keeps for weeks.

Mix with yogurt for a great veggie stick dip.
Posted by Odddlycrunchy at 1:29 PM No comments:

Here's my way to cut Butternut Squash - I'm not very strong so I tend to look for the easiest way to do things.  Necessity is the mother of invention, right?

Note: I often just pop the winter squashes, all of which are tough to cut and peel, into the oven, steamer, or dry crockpot, WHOLE, until tender.  Then cutting and peeling become very easy (after sufficient cooling).  But this time I wanted to make Fries so I wanted to cut the raw flesh.

First, lay the squash down on its side.  Cut about 1/2 inch from the stem end, rocking/rolling the squash back and forth with your supporting hand (left hand for many) as you hold the knife steadily with your skilled hand.  This is easier than trying to hold the squash still and gesticulating with the knife, I promise.

Then, cut the cylindrical part of the squash into about 3 thick slices (logs) in the same manner, rocking and rolling the squash again to help the knife go through.  For fries, I cut the logs to be as thick as the length that I wanted the fries to be.  Leave the bulb-shaped end aside for now.

(My go-to, much faster way to cook B.S. is to slice this part into medallions about 3/4 inch thick, dot with ghee or butter, and bake until tender in a 375 F oven. I keep the bulb part for soups.)

Peeling: taking one log at a time, lay it on the larger flat side and cut off the peel using the same knife, going down against the cutting board.  If you always lay whatever you're cutting on the largest, flattest side and direct the sharp edge of the knife toward the cutting board and not your fingers or palm, you'll never need a band-aid (or stitches). 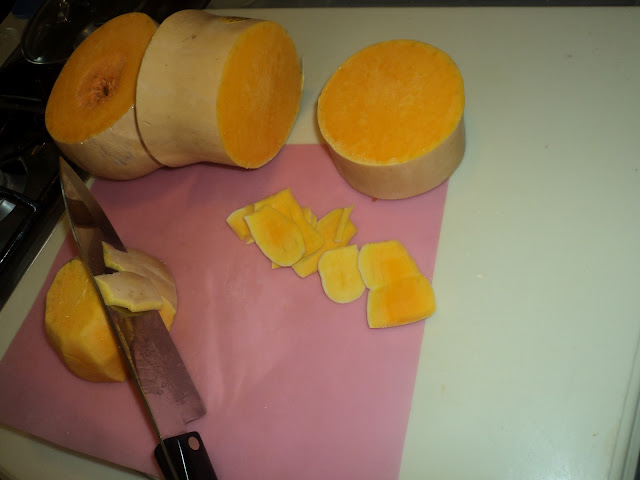 Put the peels in a pot.  There's a lot of good squash there, we'll make Velouté de Butternut Squash!

Cut the log into fries: First, slice it into 6 to 8 pieces, depending on the size of the squash and the thickness you want your fries to be. The important thing is not what size you choose, but getting all the slices as even as you can, because the too-thin fries will burn while the too-thick ones will just be mushy and not crisp. 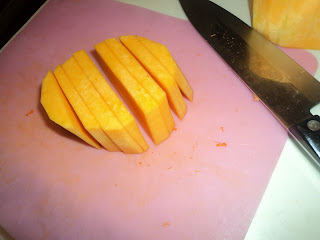 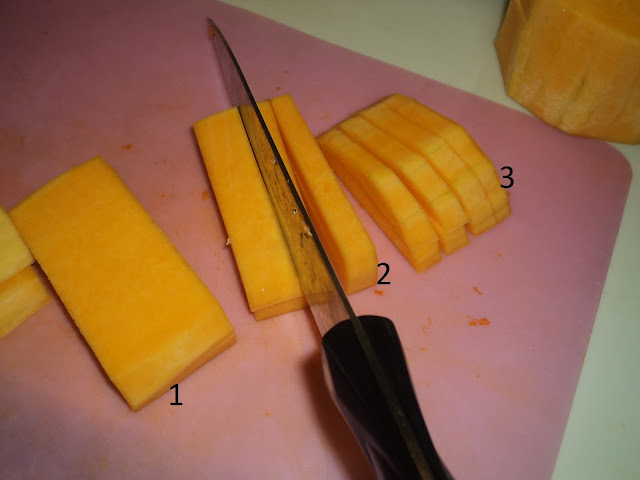 In the photo, four stacks of 2 slices each are laid on the cutting board.  "1" is the stack before cutting, "2" is the stack as it is being cut, and "3" is the stack after being cut.  TMI?  It took less time to do the cutting than it did to write this!  But the result is a pretty even bunch of French Fries.  Put them in another pot, in which you've dolloped some coconut oil (or whatever fat or oil you choose).
Now let's deal with the bulb: lay it on the cut side.  It's nice and flat, so it won't roll around while you cut it, reducing the risk of injury.  First, cut it in half. 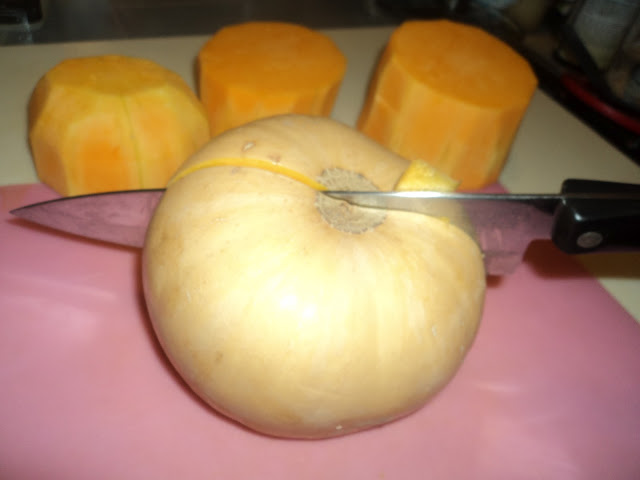 Then, lay each half on the largest cut side, in line with the principle of reducing the risk of injury, and cut the flower end off, taking off about 1/2 inch. Add the peel to the others in the pot. 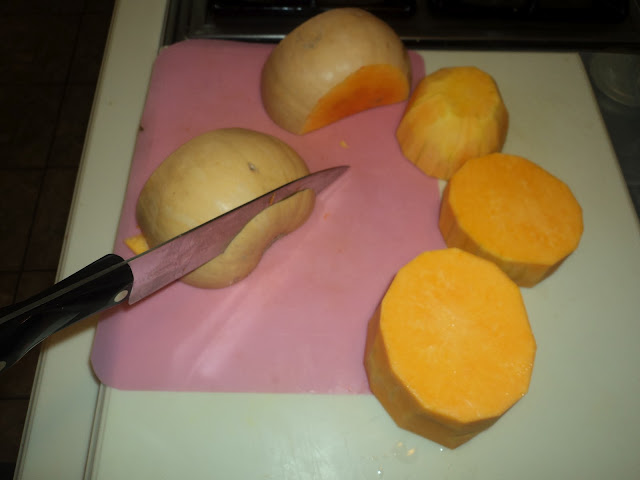 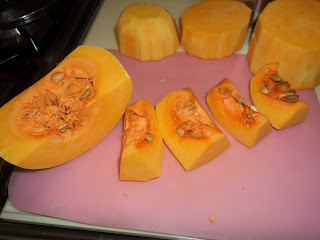 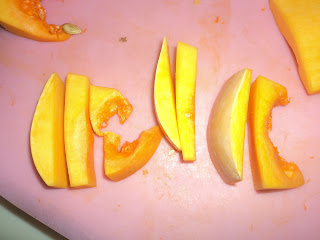 Put the fries pot on a little heat, just enough to melt the coconut oil, and toss to coat them, then spread them out on a baking sheet.

Here's a photo of the pot - holding quite a lot of "peels" and the fries, on the baking sheet.  In reality, I had to bake them in batches, because they need to be far apart from each other, or they won't get crisp.

Bake them in a hot oven (400 F) until golden-brown.  Watch carefully, they burn quickly!

We didn't find a need to add salt, they were so delicious! 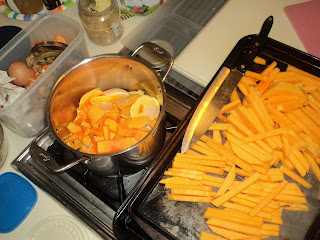 For the Velouté: add 4 cups chicken broth, cook until very tender, process in a blender until very smooth.  Add a sprinkle of nutmeg and salt and pepper to taste.  Serve with a dollop of yogurt.

The fries disappeared before I could get a photo!
Posted by Odddlycrunchy at 8:28 AM 2 comments:

Oooo.  Everyone LOVED this mock cornbread last night, and it was super-easy.  I adapted it from a grain-free but not SCD/GAPS legal recipe, and added the hemp for that grainy cornmeal texture.  If hemp is too expensive substitute 1/2 cup flaxseed meal + 1/2 cup ground nuts of your choice.

So this morning, another batch is baking as I write, and since I am quite certain I'll be making more soon, I've combined the dry ingredients for 4 batches, iow made my own cornbread mix.  Here's the recipe:

Ever wonder what sugars are in coconut milk?  I know it doesn't have very much, or I wouldn't have to add dates to make yogurt.  But the exact composition was a mystery to me, and I've spent several hours looking for it, never finding it... UNTIL TODAY.  I found this Australian Food Standards website.

The website gives the composition of coconut cream, defined as the liquid extract of mature coconut meat, presumably not using water.  So it's more concentrated than coconut milk, but if you pro-rate it it works out to, per 100 grams coconut milk:
Fructose, 0.1 g
Glucose, 0.3 g
Sucrose, 1.6 g
Total: 2 g, which is the amount listed on the box of Aroy-D coconut milk on my shelf.

So there it is: coconut milk contains sucrose, theoretically not allowed on GAPS. But it's a very small amount compared to most fruits, including bananas (6.5g of sucrose!). There's a great table showing the breakdown of sugars for a long list of fruits here.

Dried dates have about 60g sugar per 100g, which is usually pretty evenly divided between fructose and glucose, and that's what make them a good sweetener for GAPSters.


Posted by Odddlycrunchy at 8:21 PM 2 comments:

One-bowl recipe for Crumpets and Biscuits

These crumpets are delightful for breakfast or anytime with a cup of tea, are made in under 45 minutes, and use only one bowl.  I use a Pyrex 1-quart measuring cup, so I can melt the butter directly in the mixing bowl while preheating the oven.  Less mess, less cleanup!  If you don't have the Pyrex 1-qt measuring cup, use an oven-proof bowl -- glass, ceramic, or metal.

For plain biscuits just omit the last three ingredients - those are the staple bread substitute at our house.  I often do both, adding half the indicated honey, cinnamon and currants after first dropping 8 plain biscuits on the cookie sheet.

1. Put the butter in a medium-size ovenproof mixing bowl and put the bowl in the oven.  Turn the oven  to 325 F to preheat.
2. If the eggs are cold, set them in a mug of warm water to bring them to room temperature.

3. Line a cookie sheet with parchment paper.
4. When the butter is melted or almost melted (one to four minutes depending on how cold it was), remove from oven.  Do not overheat. If you're using ghee melting will take much less time.

6. Add 1 cup of almond flour and mix very well.
7. Measure the remaining 1 1/2 cups almond flour into the bowl, then sprinkle the baking soda and salt over the flour.  Mix very well.
8.  Add the honey, cinnamon and currants, mix well, or not so well, as desired.  You might like it with streaks of honey/cinnamon!
9.  Use 2 soup spoons to drop onto the parchment-lined baking sheet.  Make about 18 blobs. Shape is not important.
10.  Bake for 15 to 20 minutes.

They should still be somewhat moist when you take them out.  They will firm up as they cool.  Keep in a basket or bowl at room temperature.  Unlike grain-based breads, these don't dry out.  Though to tell the truth, they never stay long enough to tell!

Posted by Odddlycrunchy at 7:27 AM No comments: